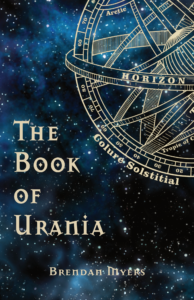 She made history. Behind the scenes.

On a cold night in the year 1514, Urania, the Greek goddess of astronomy, inspires Nicolaus Copernicus to re-imagine the cosmos with the sun at the centre: a crime for which Zeus banishes her from Olympus.

Then Julian Augustus, a former emperor of Rome and an agent of Zeus, offers her a bargain: find one mortal who can grasp the immensity of the universe without going mad, or else live in exile forever.

With help from Prometheus the Titan, and Kynisca of Sparta, the first woman to win at the Olympic Games, Urania works with Tycho, Kepler, Galileo, and other scientists of the Renaissance, hoping that one of them can win the gamble. But Julian arranges for accidents, turns of fate, even the Inquisition, to interfere with their work. And Prometheus has an agenda of his own.

As her search continues, she finds the consequences of winning might be worse than the price of losing.

This was a Kickstarter-funded project. The publisher and I are grateful to the many people who contributed financially to the book’s production.